We talked to Mike for the first time quite far into our project. His reaction was that our gag wasn’t present. He said that comedy was usually about turning things on their head and that we hadn’t done that with our monster. He suggested that instead of a monster with many teeth that perhaps a monster spending time brushing one tooth for ages might be funnier. He also suggested that the build up of tension and the mood shift at the start might be time better spent elsewhere and to cut it out altogether – perhaps an establishing shot of somewhere with shared bathrooms and the door swinging shut might be more useful to the audience.

As a result of this, Katie, Blayne and I went back to the storyboard to see if we could come up with a funnier scenario. Using similar characters and props we came up with a new storyboard:

This one starts with a monster trying to be discreet while entering a bathroom in a hotel/shared dorms. We see a poster behind the monster showing that she/he is someone famous as she shiftily slips into the door. It cuts to Ms. Monster standing in front of the bathroom mirror. She nervously looks around, then takes out her massive set of sharp monster teeth – they’re fake! She proceeds to quickly brush her teeth. The toilet flushes behind her, there’s someone there! She quickly scrambles to put her teeth in and it cuts to the little monster emerging from the cubicles. The little monster recognises that it’s a famous person and flashes lots of teeth in glee. Little Monster asks for a selfie. The last frame is a snapshot of the two with the famous monster grinning nervously and showing lopsided dentures. OR the famous monster tries to hide her secret by brushing furiously and filling her face with toothpaste foam.

We were then told that it was too far into the project to make such radical changes so we ended up revising the current story that we had. We reconsidered how we could add more jump cuts of Snappy in different poses and shifting between brushing and flossing to make the animation snappier (hence Snappy’s name, to remind us).

I drew these out to test how they could be cut together: 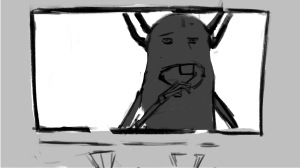 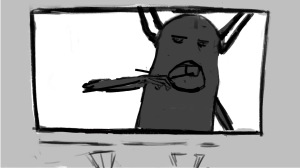 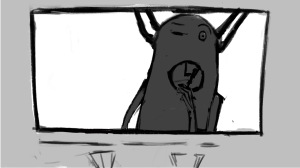 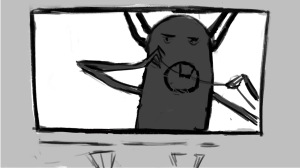 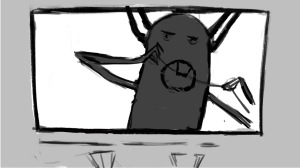 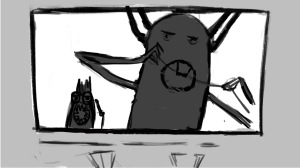