I think the most challenging parts of this project were the ideation and conceptualisation phases. It was tough trying to design characters and settings that would support the comedy, look believable and be appealing.

Looking back I think I spent a lot of time unwrapping UVs that then didn’t need to be used so perhaps I should have unwrapped for example one bottle/container and experimented on that one item. A lot of time was also spent re-unwrapping and re-texturing the second design of Snappy (also true for Blayne and Katie who had to re-rig and re-model) so perhaps we should have looked for more feedback at the design phase in order to avoid doubling the work.

I was glad I took the chance to try out Mudbox even though I wasn’t sure it would work for me. I still think that the lighting and texturing could have been taken further – it’s missing a quality which I really like in works such as One More Beer!, No More Wine and Moments on the Cat Planet, but this may have also been due to the design and creating a believable fantasy world. Some simulation/dynamics may have added to the short also. For instance, I like how in One More Beer! the Viking interacts with the environment by knocking over a tankard of beer and also how he sends up a cloud of dust and shakes the table when he sits down to show his weight more. We also didn’t get to look into creating frothy tooth paste like we wanted.

It was still fun and I enjoyed working with my team:) They made the hard work worthwhile.

I worked on the lighting, texturing, detail sculpting, and initial concept art. 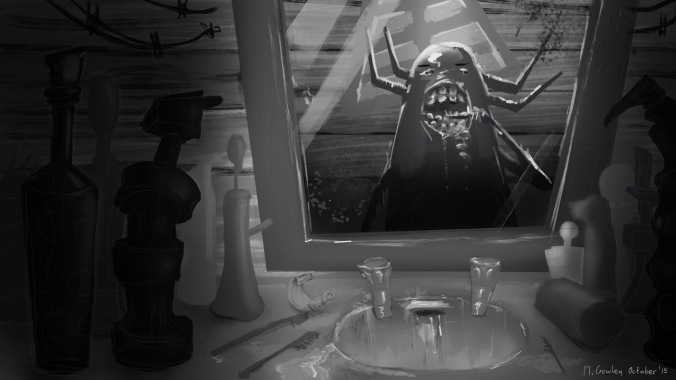 Blayne suggested that we should render the three layers – foreground, character and back wall of our scene separately. This saved hugely on the render time (especially because the background only needed to be rendered twice) and allowed for easier colour and contrast editing at the end. I rendered two different light set-ups for before and after Snappy turns on the light and then Blayne was able to tweak the background layer in Sony Vegas to make it look like sunlight coming through the back window. I tried some different versions of warm/cold between the foreground plus Snappy and the back wall in Photoshop for a quick visualisation of options. 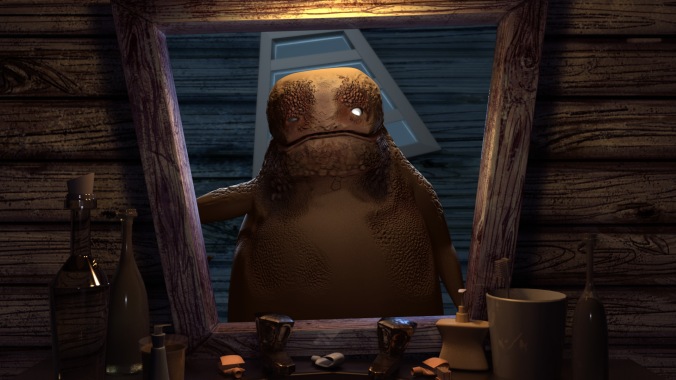 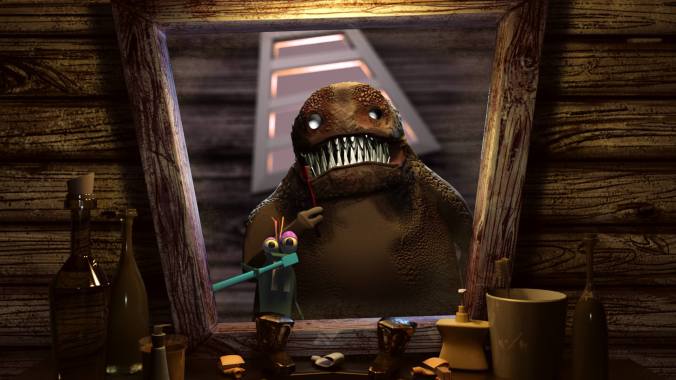 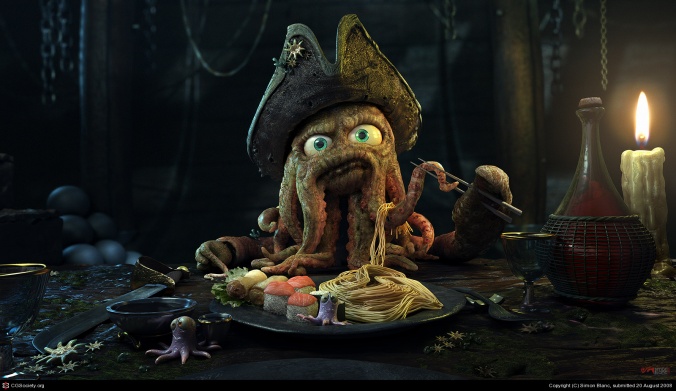 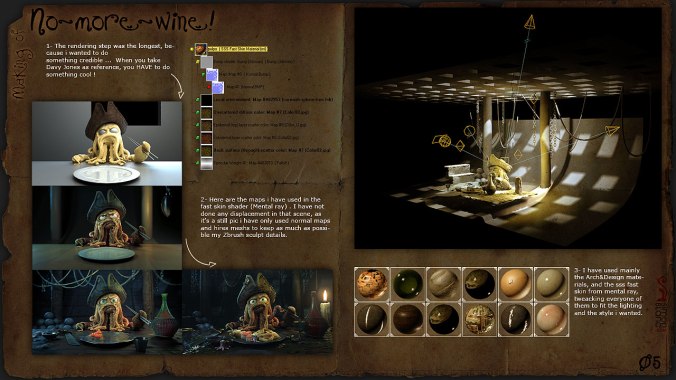 I looked at No More Wine by Simon Blanc quite a bit while lighting and texturing Open Wide. I really liked the mixture of cartoony design and realism. Looking back I think I could have experimented more with the skin shaders on Snappy and Gerard. I really like the warmer translucent areas in No More Wine and the specular areas. I also liked the mixture of warm practical light in the foreground and cold light behind. I had intended to cast some light shapes on the background similar to No More Wine but then the view of the back wall was quite narrow through the mirror.

This was a ‘making of’ that I read through for inspiration:

As usual, rendering resulted in a few problems. For one I had forgotten, while setting up the lighting, that you can preview the light in the viewport. Because of this, and despite doing a few spot renders with the animation in place, I missed a few problems e.g. Snappy’s head became too bright when he leaned too close to the light and his teeth fell into darkness for too long when he leaned backwards. One of his eye textures also failed to load. I also had to make sure that all the lights were linked correctly throughout the short e.g. the geometry of the toothbrush changed when it snapped and needed to be re-linked. Luckily these problems weren’t too difficult to fix. For the eye and teeth problem we were able to reload the texture/set up new lighting and cover everything, except what needed to be fixed, with a black surface shader. Blayne was then able to layer these new renders in Sony Vegas. For the lighting on the head, I just keyframed the position and shape of the area light so as to keep the intensity and spread of light even throughout and re-rendered the affected frames. 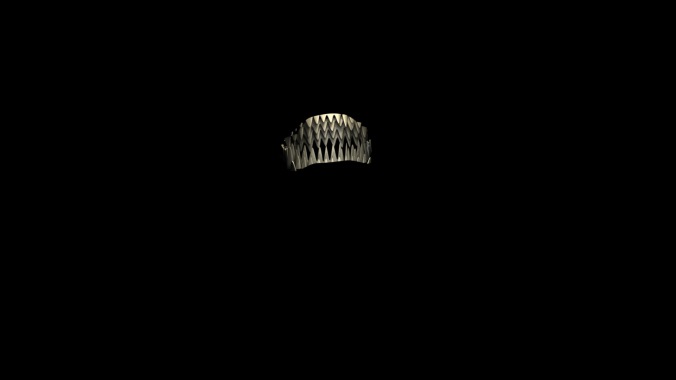 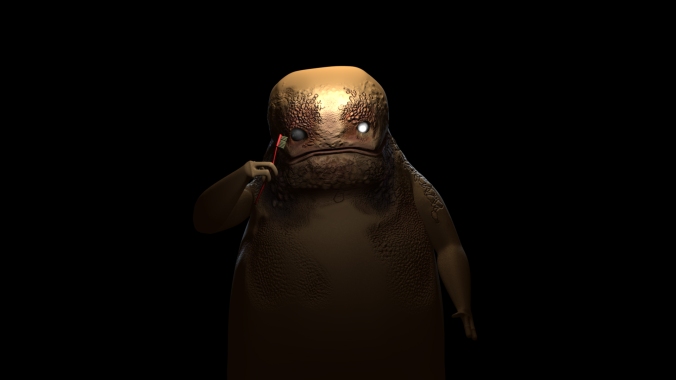 Blayne had also rendered an ambient occlusion pass but we didn’t understand the correct way to apply it at the time and put it over the direct light instead of a diffuse pass first. Alec showed us this tutorial which I intend to go through:

I started to experiment with creating volumetric lighting in Maya but I found it difficult to get the look I wanted. At first I was using a spotlight and creating a light fog node but when I tried to shine it through a window shape the spotlight would shine through the geometry of the wall. I realise now that this was probably due to the samples being too low.

I was also finding it hard to make the light rays appear through the window. 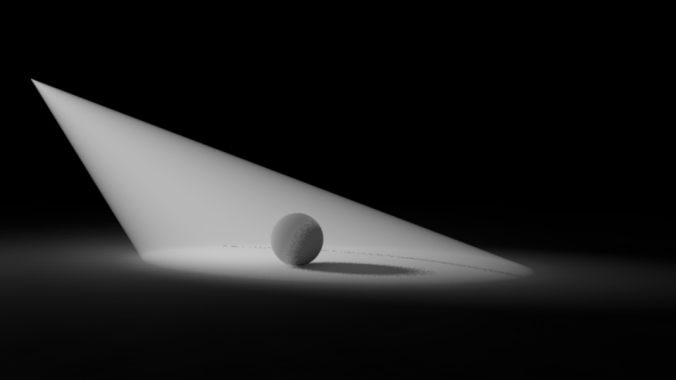 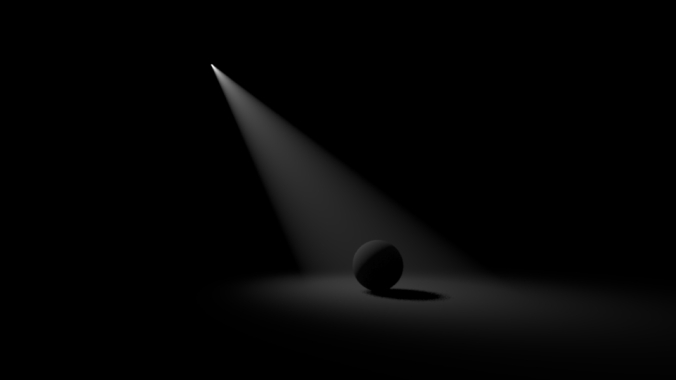 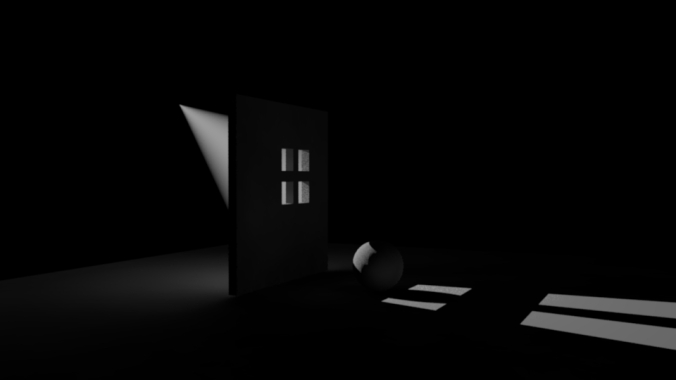 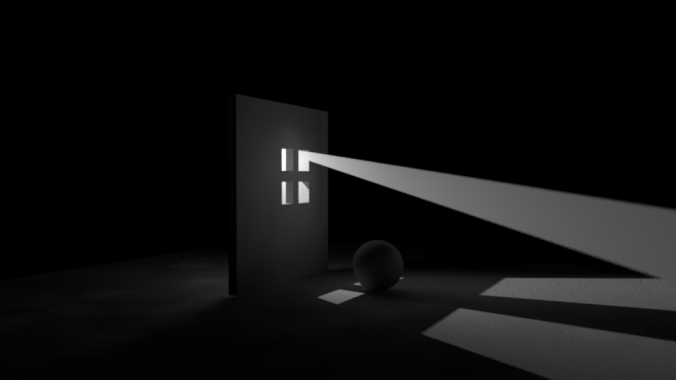 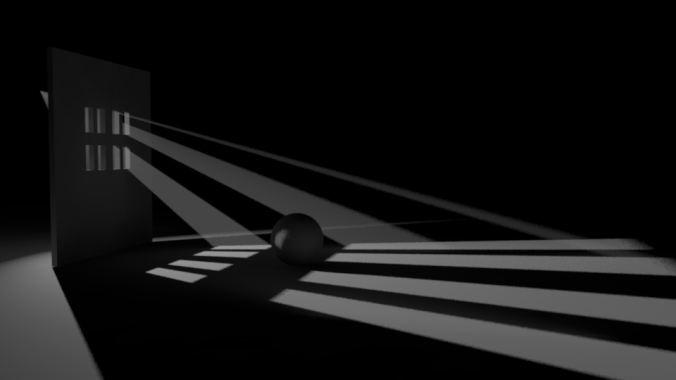 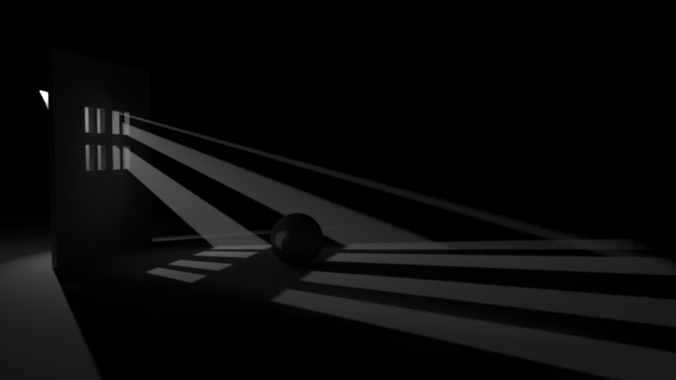 Alec reminded me of this tutorial so I went back and tried it out as an alternative to using the spotlight fog node:

This method uses volume primitives to add a container of fog within the scene. I liked that this method affects area lights as well as spot lights and I also liked how soft it can be. However, the fog rays were invisible from the angle I wanted to render at so I stopped experimenting at this point so as to work on other parts of the short.

We wanted to create an atmosphere that would be suitable for a scary monster but not something too dark and grungy. I experimented with what I had read about the lighting in American Cinematographer about Penny Dreadful and how they were encouraged to push the black. I found it hard to get a balance between dark shadows and still getting a clear read of the scene. I also didn’t want the shadows to be too deep and without detail. I experimented a bit with using image based lighting to lighten the shadows as Alec suggested but didn’t spend enough time playing with this. Final Gather also helped to lighten the shadows but added a lot to the render time. 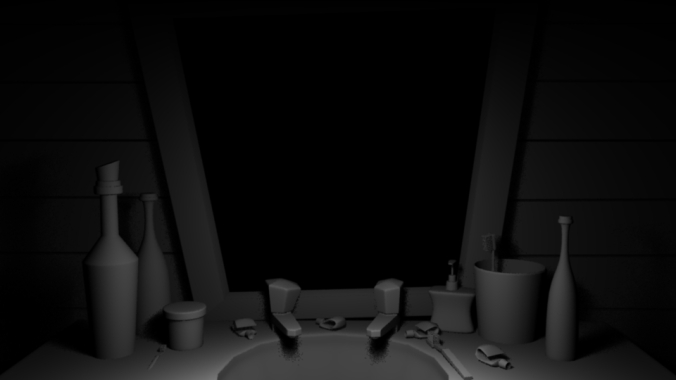 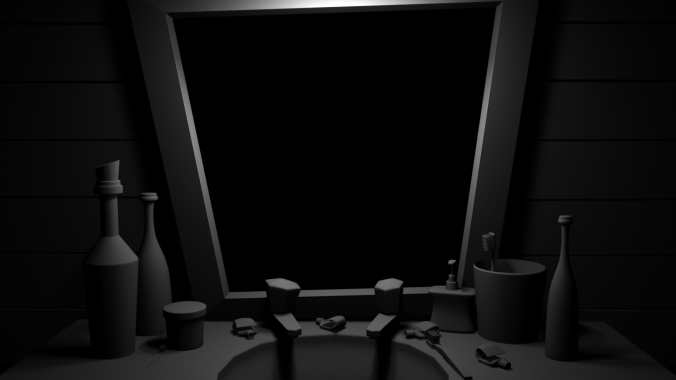 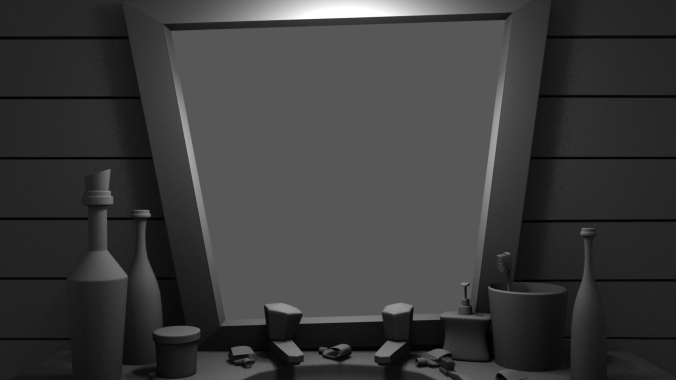 For the wood texture I painted over a photograph of wood and then used my painted layer alone as a bump map. I tried roughing up the wood of the mirror with a painted bump map also but the team preferred the mirror being smooth. 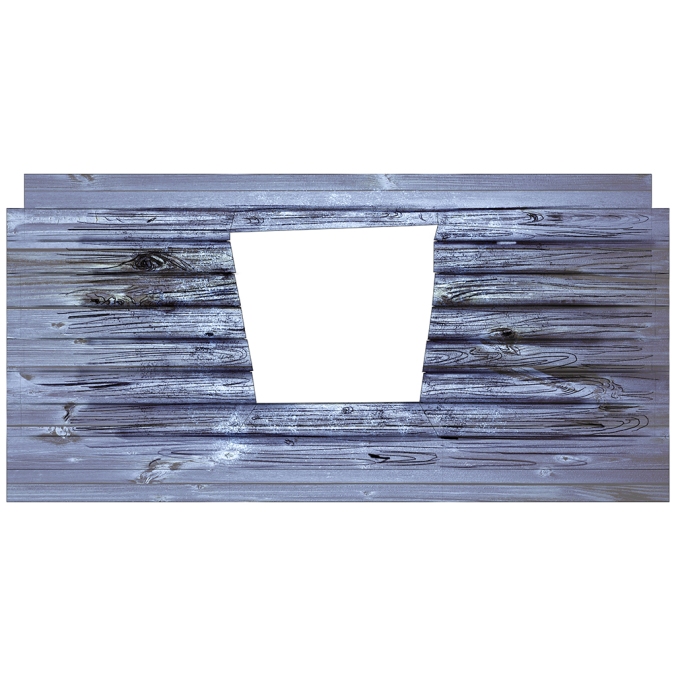 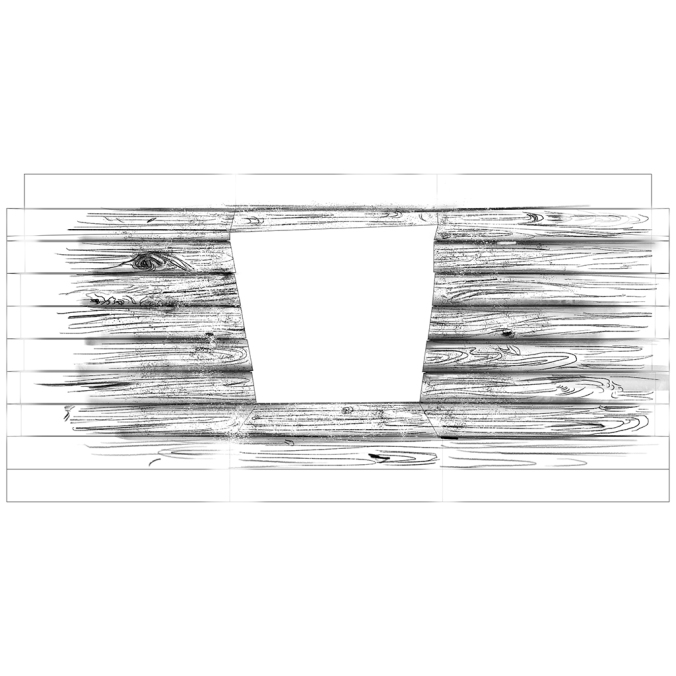 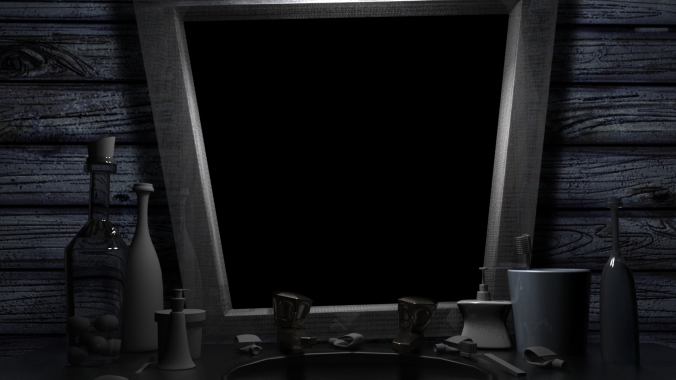 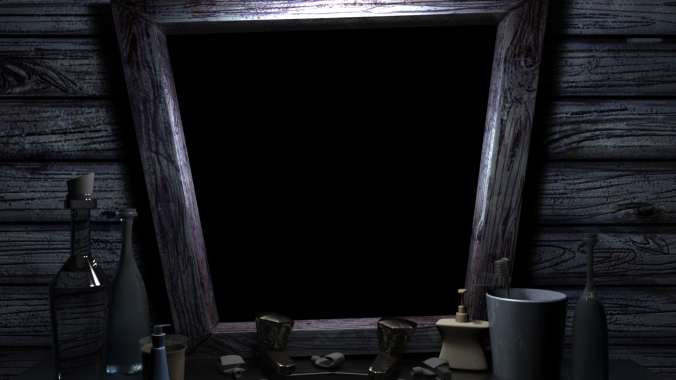 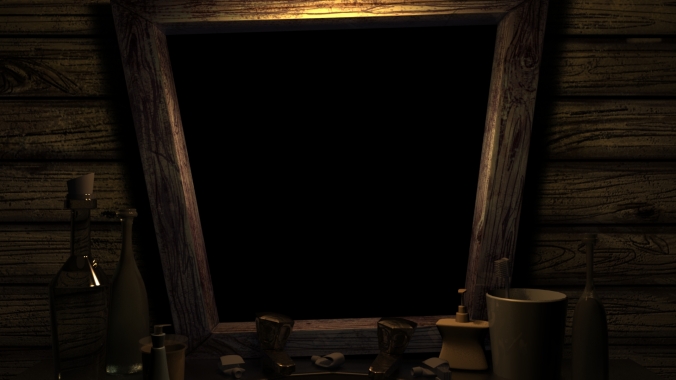 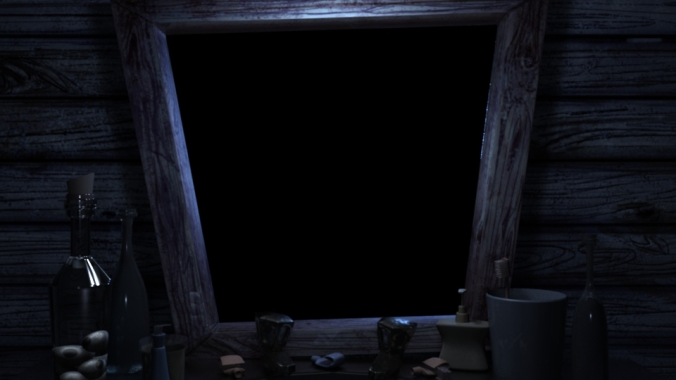 I used mia_material_x presets for the other assets. I had unwrapped everything with the intention of adding more details such as worried surfaces and labels. I also shared the unwrapped and lit project files with Andrew to experiment with. Katie gave her eyeball model to me to put in the bottle like we originally intended but then we though it looked quite distracting (like you can see above). I would have liked to see a Brian Miller inspired graphic look on this also like I mentioned in a previous post – link 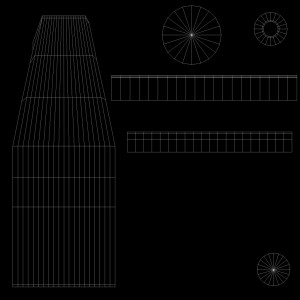 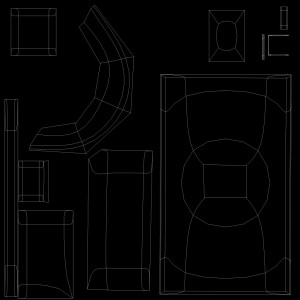 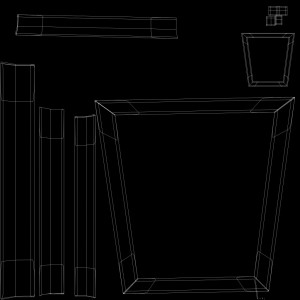 I hadn’t unwrapped UVs in a while so at least it was some practice.  I also tweaked some of Blayne’s models to have more detail that would catch the light such as on the taps.

I looked at Penny Dreadful for some knowledge on creating horror and mood with lighting. This would have been more relevant if we had of focused the comedy on the contrast between a scary opening turning into a monster carrying out a mundane task but it was still interesting reading about the thought process and approach the team on Penny Dreadful had for creating the lighting.

“The characters find themselves in some very dark environments…The backgrounds just drift away into darkness. While we were grading episodes one and two of season two, Chris [W. King] and John [Logan], our producers, said over and over again to us and to the colorist, Chris Wallace, to ‘Go dark, cave it in, go as dark as you dare.’ – to tell the story visually that we want to tell. ‘Don’t feel restricted – that’s the main thing John wants. He wants the show to feel foreboding, for the audience to squint and find the characters in the darkness.”

These are my notes from some Digital Tutors tutorials I did a while back but hadn’t put a lot into practice until this project.

Introduction to Lighting in Maya (2014) Available at:

This was a simple introduction to lighting that went into the different types of lights (helpful especially for spot lights) and shadows.

This was mostly useful for helping me see how real world scale affects lighting. I made Snappy about 180cm in our scene and scaled everything relative to him.

This introduced a lot of new concepts to me like some of the physics of light, rendering with global illumination and final gather, gamma correction and using a linear workflow and working with displacement maps exported from another program into Maya.

These were some reference videos I found to help us imagine how Snappy’s mouth might be designed and how the muscles might work to reveal the teeth and gums.

Thanks to Kerry for putting Thunderdrum in mind:)