One of the ideas I pitched to the team was the idea of visualising a small sound in a city become a city-wide sound. I thought that this would be achieved by inserting a visual effects/abstract characterization of sound into live footage. Evolving from this/in an effort to visualise what this could look like we came up with a new idea involving small creatures, such as ants, playing tiny instruments whose sound was then amplified through a Rube Goldberg type effect (e.g. through cans, rolled leaves etc.) to be heard by humans passing by (we imagined in a park). This also lead us onto another idea which we liked involving lots of small creatures collaborating on an epic scale and then the camera would zoom out/cut to the result of their team work which would be something insignificant to the eyes of a human e.g. an autumnal leaf falling from a tree.

Katie showed us this video, Snowflake by Eoin Duffy

We loved the unexpected twist given to an everday/common event. We similarly liked this aspect in One More Beer! – the comedy is created from breaking expectations, which in this case comes from character stereotypes. 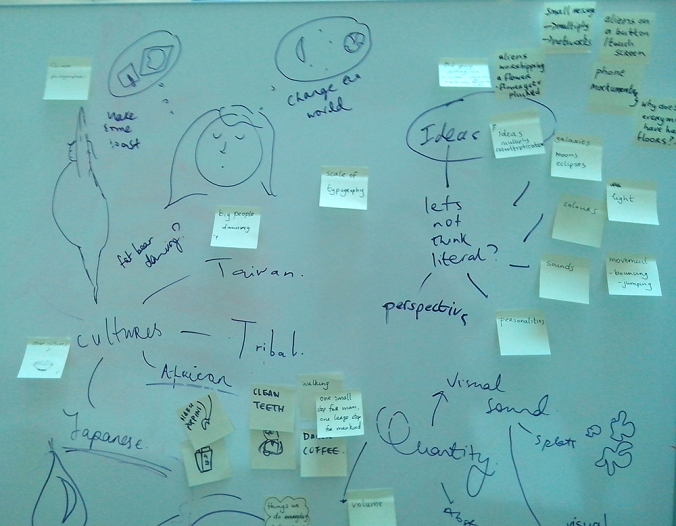 We tried to ideate with this in mind. Katie was especially good at thinking of comedic scenarios. For example she came up with Cactus Sneeze where objects in an office are freaking out trying to stop a giant cactus from sneezing. It lets out a tiny sneeze and everyone is relieved but then the tiny cactus sneezes and kills everyone with it’s prickles. We also considered her idea where a character is being rained on and is then crushed by a giant rain drop.

We put all our favourite ideas onto a new board to expand on them and eventually we agreed that our top favourite idea was Katie’s story about a monster brushing her/his teeth. This started as a monster brushing a tiny row of teeth which then opened wider and wider to reveal more and more teeth. We then considered adding the contrast of a smaller character quickly coming in, brushing it’s one tooth, and leaving again. We agreed as a team that it was best to try and start with a simple idea as we had read in Ideas for the Animated Short (2008) that starting simple and building complexity is better than starting complex and having to chop it down to simplicity.