Talking to the 3rd years on the 13th about their placement was great. I was most impressed by Kristian Glenn’s work and thought it was cool that he got to work around music that he enjoys but I think it was Fiona Mc Laughlin who gave the best advice and insights.

A few weeks ago I was asking Alec what renderer would be better to use for our animation. I think we ended up just using Mental ray because we all had a bit more practice with setting up lights and materials to use with Mental ray (apart from Mark maybe who might have used Arnold more than us). My knowledge is still very lacking about the whole thing so I thought it would be worth my while to look into it more. I came across this article on fxguide which is pretty packed with information. It focuses a lot on Global Illumination and the different solutions to this: conventional radiosity, photon mapping, point clouds, brick maps and Monte Carlo ray tracing, and it then goes on to discuss the different renderers; RenderMan, Arnold, Mental ray, V-Ray, 3Delight, Maxwell, 3dsMax Scanline renderer, Mantra (for Houdini) and Modo’s, Lightwave’s and Cinema 4D’s renderers. I’m not going to pretend I understand all this but it’s still good to know a little more:

“Jeremy Birn (lighting TD at Pixar and author of Digital Lighting and Rendering, 2006) succintly defines GI as any rendering algorithm that simulates the inter-reflection of light between two surfaces. When rendering with global illumination you don’t need to add bounced lights to simulate indirect light, because the software simulates indirect light for you based on the direct illumination hitting surfaces in you scene.”

I wasn’t convinced that the framing in the last scene was working very well. Looking back it may have been because the sky and cliff were looking very flat in the first final render of Slán and a lot of the cliff was revealed in shot. These were some camera movements I tried to see if the team would like/prefer them (keeping in mind that the particles would be flowing out and up):

We had also considered going back to the camera movement from our greyscale animatic which panned upward to the sky. We liked this shot but found it difficult to focus on Anam and the particles and then give enough time to pan past the monument and reveal the writing. Mike also pointed out that we’d be loosing a nice final frame that included Anam in shot.

In scene 02 we’d originally framed the scene from further away with a slight zoom leading inward. Mike gave us good feedback about how this camera work wasn’t continuing very well from the previous scene. For this to work our character, Anam, would have to either exit screen left in the previous scene (to enter right in this scene) or Mike also suggested that Anam entering above the camera in this scene could work (as she disappears over a hill previously). I had some fun trying out some different versions of this. I was working with Mark’s old version of the swim cycle.

At first I was having trouble. I knew I wanted to start with Anam going over the camera and then pan left to reveal the ship but if i started too far right then the camera would have to move too fast in order to reach and focus on the ship (in 5 seconds). I also didn’t want to move Anam’s starting point left as she needed to travel from a right to left direction and follow the projection of the cliff.

Clare and I also discussed what it might look like if the camera seemed to have one continuous ‘bottom right to upper left’ motion through scenes 01 and 02. I tried straightening out the ease in and ease out of the camera graph (not very well by the looks of it) but thought it looked quite jarring.

I also tried moving the camera to follow Anam inward and frame the ship in the monument but wasn’t sure if it worked so well with Anam out of frame so much and the final composition didn’t feel that strong either.

Another variation of framing the ship:

In this one the camera starts on the left which didn’t fit with the previous scene again (it didn’t look that interesting anyway).

This was the one I was most pleased with as it got a closer shot of Anam and then revealed the ship without being too rushed.

I also tried a version of Anam coming from under the camera but didn’t think this worked as well plus Clare, Abigail and Mark seemed happy with Anam above.

This is our final 15 second animation before revisions:

This is our revised version:

This is my semester 2 work. 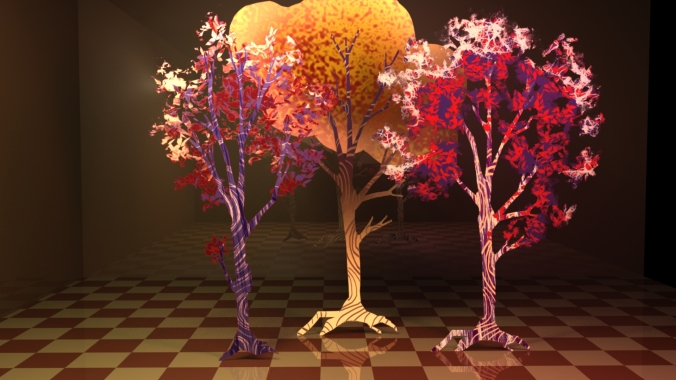 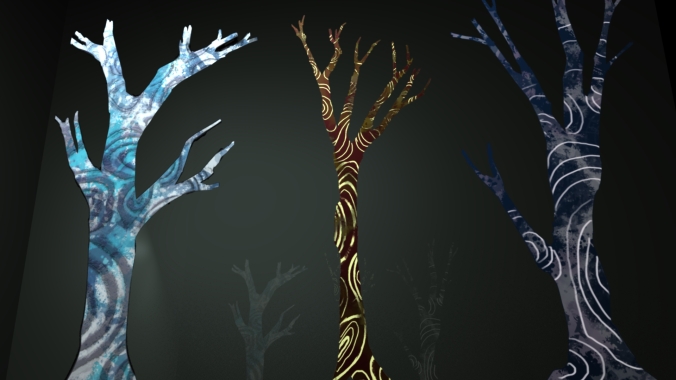 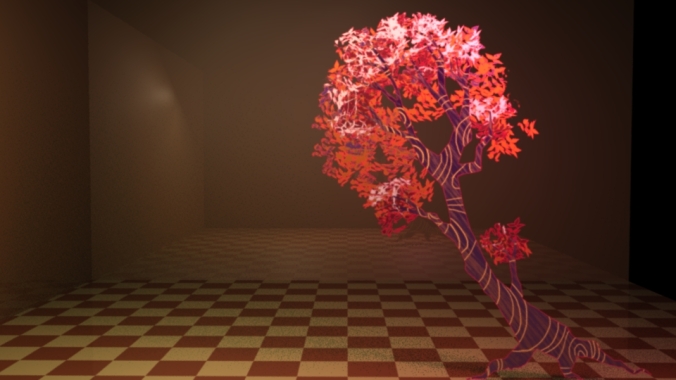 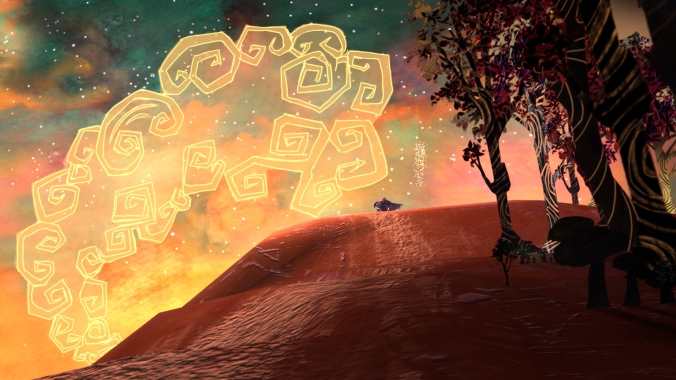 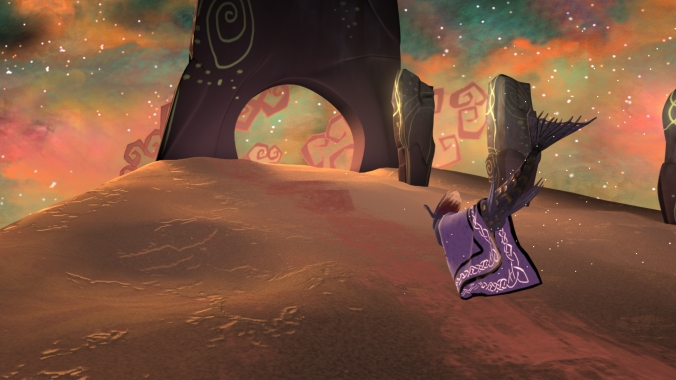 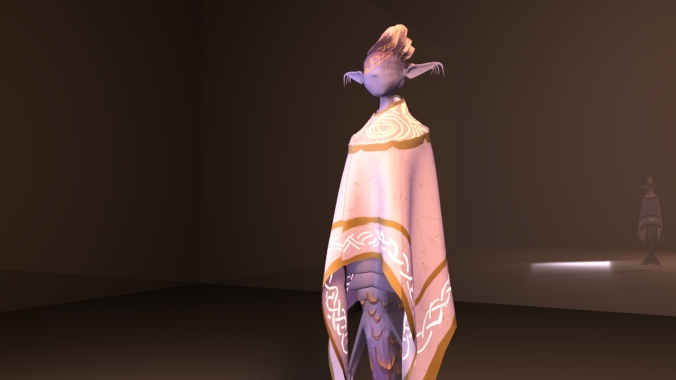 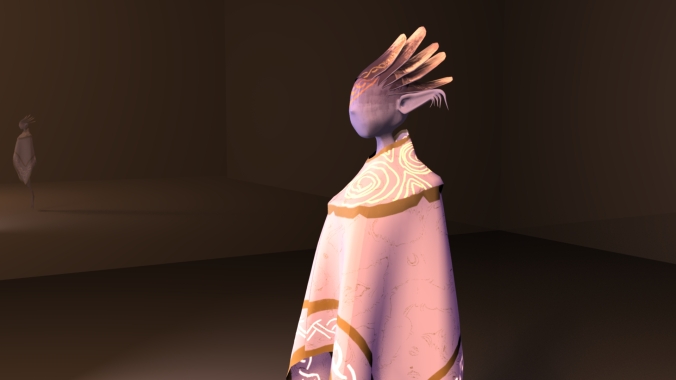 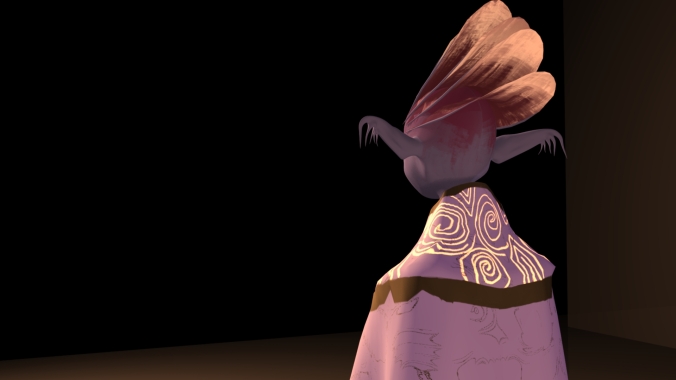 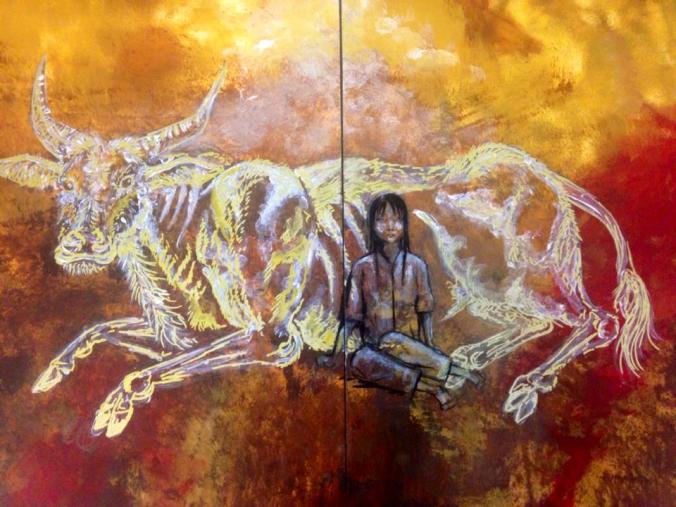 Contributed to overall design of piece.

I had considered trying this for our animation but never got around to it.

I’m also not sure how much control it gives you over the lighting.

These are some of the videos we looked at when considering how our character could move.

We really liked how flowy the ink creature was and I thought for a while that we could do something similar with nCloth.. Clare found this tutorial on how to create wings with nCloth:

When making Anam’s head scales I tried to model them similar to wings with a skeleton on each side and a plane stretched between. I had planned to make them look like they were caught in an ethereal breeze but I didn’t get enough time to figure out how to make separate nuclei to act on the cloak and head scales (I thought that maybe the head scales needed less gravity but there’re probably other ways of going about it).

Okay so i might have went a little over saturated with the purple lol. The lighting also shows up the flaws in the topology, like I think I may have gotten the flow wrong over the muscles in the neck. 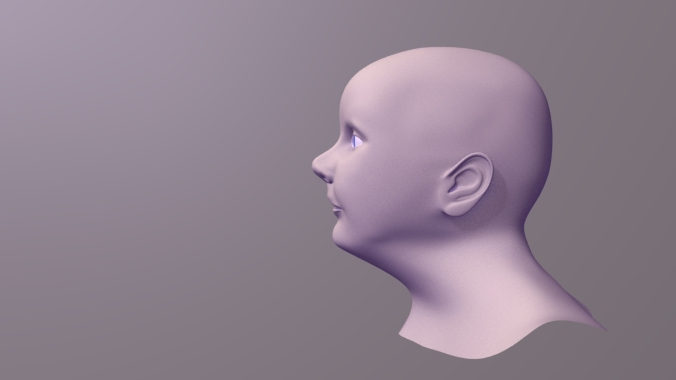 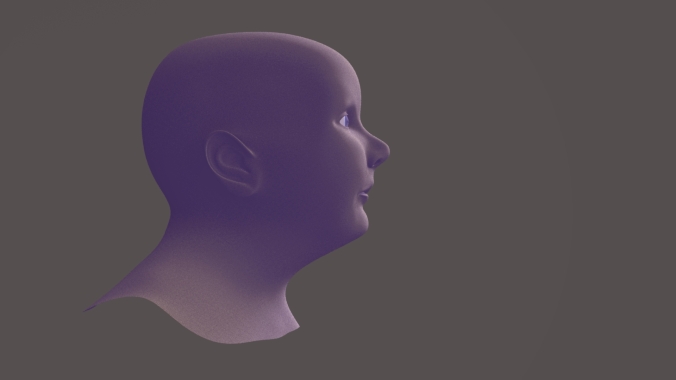 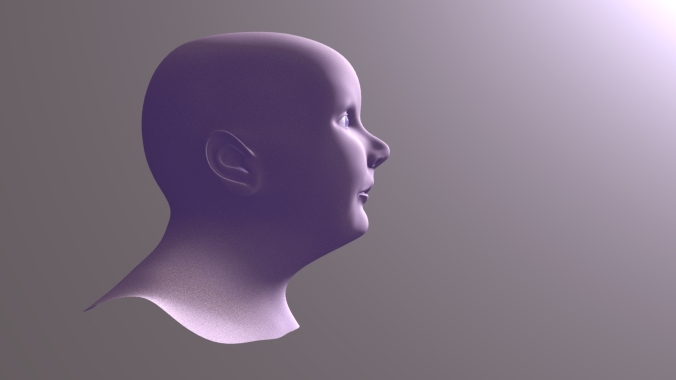 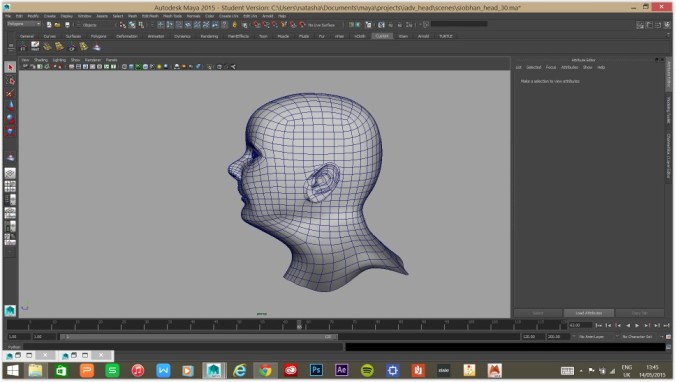 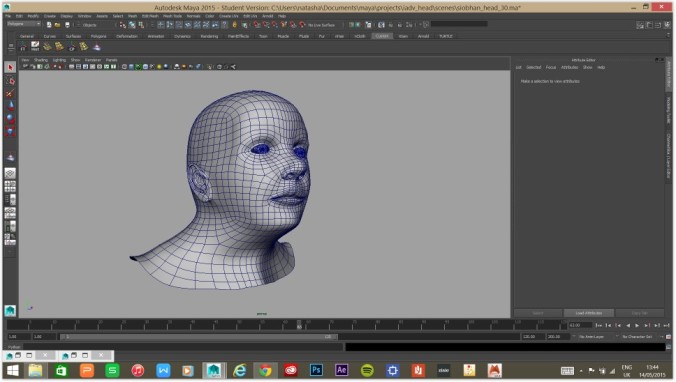 These pages from Loomis’ book Drawing the Head and Hands was good for remembering how the facial muscles flow for planning topology. 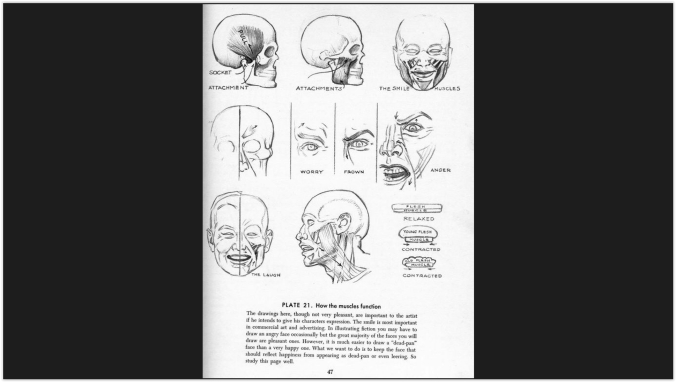 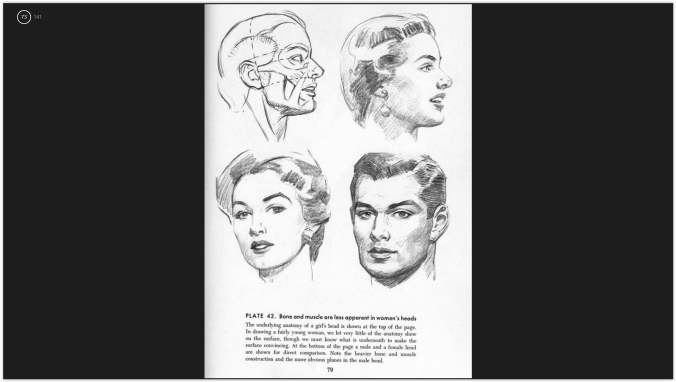